Skip to content
August 5, 2015 Ruchi BhatiaLeave a comment
1. HCL Tech Takes ‘Social Recruiting’ To The Next Level In India With #CoolestInterviewEver
http://www.socialsamosa.com/2014/02/hcl-tech-takes-social-recruiting-next-level-india-coolest-interview-ever/

3. Why UPS Has One of the Most Successful Social Recruiting Strategies [CASE STUDY]
http://linkhumans.com/blog/one-of-the-most-successful-social-recruiting-strategy-ups

Enjoyed the discussion and gave a pat on my back 🙂 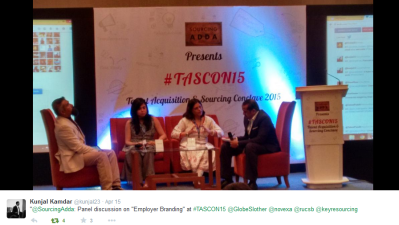 Today  I had an opportunity to attend webinar  on Employer Branding during  HR Conclave 2014 organized by ET  .
Special Address 5: Leveraging Employer branding to be an Employer of Choice and attract passive candidates
Naveen Narayanan, Global Head-Talent Acquisition, HCL Technologies made very interesting and relevant points wrt Employer Branding and how to leverage Social Media for Recruitment.
I immediately followed him on twitter after listening to his talk .
Key points and insights  captured
People use Social as Job boards
Social is a way to engage with Passive candidates
Employer branding influences passive candidates
Branding internally as important  and branding externally
Branding to internal employees so that they talk to their external networks eg through Linkedin
Is your Recruiting  information accessible on mobile ?
Let employees influence passive candidates through employer branding
You are curator of information today
People are talking amongst each other
You can only watch that space and curate that space
Campaign on Twitter – activity for 3 -4 weeks
5 jobs, mentoring also done on twitter to engage  passive candidate
Passive candidates suddenly becomes active when approached through social media, non conventional means eg twitter
Interacting directly with global candidates , trending on twitter , 25k followers, 25 publications wrote about the campaign and event which otherwise would have costed many more dollars , now that much publicity through social media campaign
Brings it to life how passive candidates can be engaged,
Less than 5000 K dollars were spent on campaign
Sodxeho uses pinterest
TechGig – holy grail for developers
Do u know hangouts  , watering holes where people are there
Are you hanging out there ?
B-Schools, how do you engage with students
In colleges, try and find people who have live business idea
Disruptive practices – supporting startup ideas in colleges
Why doesn’t recruiting team has hunters and farmers ?
Employees want to know other than role, job, money
How can I contribute in social arena
Employees want to make very active role
Measurements?

Topics I blog about